N26 extends its partnership with Transferwise, Paypal may begin to offer direct sales of Bitcoin and other cryptocurrencies 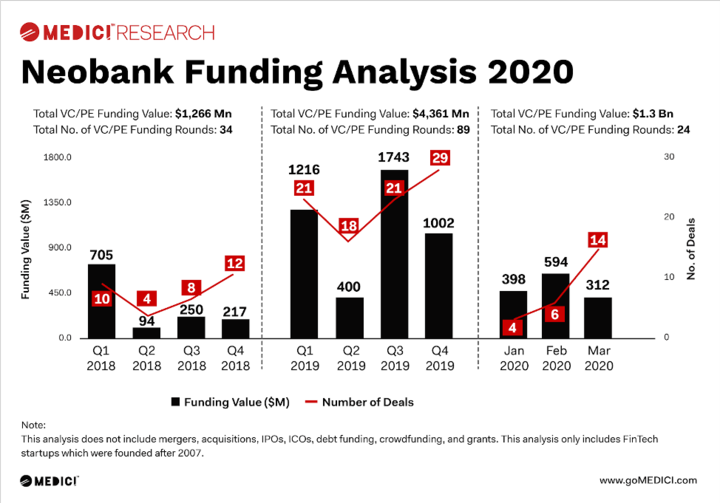 Last week broke a record for fintech related breaking news for the year. Therefore, this week’s newsletter reflects this, in its length. For an easier read be sure to follow this guideline; the newsletter is partitioned into three parts

Please feel free to reach out if you have any questions or comments.

Medici’s report: Neobanking 2.0: Global Deep Dive 2020 covers what the present and future look like for virtual/digital-only banks. Furthermore, the report analyzes the neobank funding trend for all quarters of 2018, 2019, and Q1 of 2020.

In other news, the Cambridge Centre for Alternative Finance is working with The World Bank and the World Economic Forum on a Global #Covid19 Rapid Assessment Survey to assess the impact of the pandemic on the FinTech and RegTech markets, how the industries have responded and what the regulatory and policy implications are. To participate, you can take the survey here: https://lnkd.in/g9eG4-P

The results will be used to inform regulators and policy makers. It runs through until 30 July and is 15 questions long.

Also, Wharton Fintech’s latest episode is our podcast recommendation of the week. In this episode, Ryan Zauk sits down with Stuart Sopp, Founder and CEO of Current. Current is a leading U.S. based challenger bank enabling access to affordable and premium financial services to people traditionally overlooked by the banking industry. After explosive growth serving essential workers during COVID-19, Current raised additional funding from Foundation Capital and is expected to reach 2 million customers by the end of 2020.

Wirecard AG's former CEO, Markus Braun, was arrested. He was apprehended on Monday evening. He was granted bail at €5 million. Apart from paying the sum, Markus Braun will have to report to the police on a weekly basis. Furthermore, Germany's Federal Financial Supervisory Authority (BaFin) filed a criminal complaint against Wirecard AG on suspicions of market manipulation. “The balance sheet presentation of sales and assets in the company's annual reports for 2016, 2017 and 2018 was incorrect," BaFin spokeswoman.

Meanwhile, in the Philipines, Mark Tolentino, the lawyer identified as a trustee of Wirecard, claimed that he is a victim of a frame-up and identity theft, adding that he had no knowledge of any scheme. Tolentino said he is thinking of pressing charges.

Auditors at Ernst & Young accused Wirecard AG of committing "elaborate fraud" relating to the missing €1.9 billion. "There are clear indications that this was an elaborate and sophisticated fraud involving multiple parties around the world in different institutions with a deliberate aim of deception," EY said in a statement. Wirecard said it is filing for insolvency proceedings amid the accounting scandal. Wirecard shares decreased over 70% following the news.

Wirecard owes creditors almost $4 billion after disclosing a gaping hole in its books. EY said while it was completing the 2019 audit, it was provided with false confirmations with regard to escrow accounts and reported them to the relevant authorities. SoftBank Group Corp. examined the possibility of taking legal action against audit services firm Ernst & Young over its involvement in the Wirecard AG accounting violation.

What about the past? Read FT’s timeline on Wirecard and their indepth analysis. The article covers the first attack that suggested irregularities, the Singapore scandal, persistent allegations of fraud, and its final collapse.

Finally, an insightful overview from Chris Skinner, who is best known as an independent commentator on the financial markets. He emphasizes that Wirecard “is not a FinTech company. They are a bank behind FinTech firms. They have always been a bank and never been a FinTech, and they are regulated by BaFin, the German regulator, who also royally messed up.”

N26 extends its partnership with Transferwise, Paypal may begin to offer direct sales of Bitcoin and other cryptocurrencies.

N26 announced an extension to its partnership with global technology leader in international payments TransferWise, to offer a wider range of options for foreign currency transfers. N26 customers can now make international money transfers - directly within the N26 app - in more than 30 currencies.

Zopa, the 15-year-old peer-to-peer lending company, is announcing that it has been awarded its full U.K. bank license, as it gears up to launch a fixed-term savings account, followed by a credit card. Zopa had provisionally acquired a U.K. bank license in December 2018 “with restrictions,”. The full license, which required Zopa to raise a further £140 million late last year in a round led by IAG Capital in order to meet capital required to become a bank, means it can now launch more widely.

Mark Hipperson, a co-founder and former CTO of British neobank Starling Bank, is announcing £5.25 million in seed funding for his latest venture, cryptocurrency exchange platform Ziglu. Ziglu provides a digital platform that enables customers to exchange fiat currency for cryptocurrency – Bitcoin, Ether, Litecoin and Bitcoin Cash – with zero hidden fees or transaction charges, and to monitor their balances in real-time. Of course, it has a plethora of competitors.

Memo Bank, a French digital lender targeting SMEs, is gearing up for launch after securing $23 million in funding. Authorised by the European Central Bank and the French banking authorities, Memo claims to be the first independent bank to emerge in France in half a century.

Revolut announced the addition of American Express to its Open Banking feature. The feature allows Revolut retail customers in the UK to connect their American Express and other banks accounts to Revolut, making it possible to see all of their balances and transactions in one single app.

Germany's solarisBank AG and American Express have come together to create a new installment payment option for card payments of €300 or more. The new service, dubbed Splitipay, will go live in a pilot phase in July and will be available to all German holders of a personal American Express Card in the course of 2020. Under the arrangement, solarisBank provides the necessary loans as well as the technology for the product, while American Express provides the user interface via an API.

The deal between Neon, the Zurich-based digital bank, its open-banking partner Hypothekarbank Lenzburg and British fintech Transferwise is designed to enable clients of the Swiss firms to transfer money both faster and cheaper to recipients abroad. Clients of Neon will be able to send money directly through the app to more than 40 countries in 20 currencies, according to a statement on Tuesday. The move becomes possible with the integration of Transferwise services into the Neon application.

Cross River has cranked out more loans under the federal Paycheck Protection Program than all but three of the country’s biggest lenders. “This is in our DNA,” said Gilles Gade, Cross River’s founder and chief executive. “It’s exactly what we were built for.”

Karat is a new startup promising to build better banking products for the creators who make a living on YouTube, Instagram, Twitch and other online platforms. Today it’s unveiling its first product — the Karat Black Card.

Digital payment giant PayPal is reportedly mulling a plan to offer direct sales of Bitcoin and other cryptocurrencies to more than 300 million users globally through its mobile payment subsidiary Venmo. A second source said the service could be available in the next three months or sooner. Both PayPal and Venmo declined to comment on the news. If PayPal’s plan follows through, it will open a huge door for retail cryptocurrency investors.

Uber financial services leader Peter Hazlehurst has stepped down from his position as the rideshare company has put its plan to start a digital wallet on hold. The company is instead focused more on ridesharing and food delivery instead of the planned financial expansions.

Credit Suisse (CS) has entered into a strategic agreement that allows the Swiss Bank to buy preferred shares equivalent to up to 35% of the total capital of Brazil’s digital bank modalmais. Under the terms of the agreement signed with the controlling shareholders of modalmais, the two parties will work together to explore synergies between their investment services and products.

Statrys joins forces with Railsbank as it is expanding throughout Asia backed by investment from Visa, the world’s leader in digital payments, and Global Brain, a major venture capital firm. Launched earlier this year, Hong Kong based Statrys has the ambition to offer comprehensive banking services without the hassle of dealing with a bank.

Kaspi, the ecommerce banking app which holds a 65% market share of digital payments in Kazakhstan, is expanding its offering into neighbouring commonwealth independent states (CIS) – starting with Azerbaijan. Kaspi, which is 4% owned by Goldman Sachs, serves eight million users in its home market.

DayTek Capital announced that it has joined Visa’s Fintech Fast Track program, allowing the business to leverage the reach, capabilities and security that VisaNet, the company’s global payment network, provides. DayTek Capital, which is in the process of building a neobank, ‘Infinity’, is set to use these unrivalled resources, alongside access to a cross-functional team of fintech experts at Visa through the Fintech Fast Track program, to bring its revolutionary neobank to market.

Financial services startup Zeller has secured $6.3 million in a funding round lead by Australian venture capital heavyweight Square Peg Capital, as it takes aim at plugging the gaps in the business banking market. The seed funding gets the ball rolling for the fintech which will develop products, ranging from payments to financing, that are scheduled for release to market next year.

InSites Consulting-Consulting has published its annual report on customer satisfaction with digital banking services in South Africa. The report rates each banking institution with a score from -100 (worst possible experience) to +100 (best possible experience), combining the scores for internet banking (via computer web browser) and mobile banking (via mobile apps).

NOTE: This article was featured in my weekly newsletter on June 30, 2020. Do you want to be the first to read the next weekly overview? Sign up for my Weekly Digital Banking Newsletter here.

Is weekly not enough for you? And do you want to be in the loop with the latest FinTech news every weekday? You should sign up for my Daily Fintech Roundup here

And last but not least: follow me on Twitter or Telegram channel to be the first to hear about any update from the FinTech industry!