Neo vs High Streets: What can they learn?

Digital Disruption. A phrase that has been circulating in many industries in the latest years. The Oxford College of Marketing defines digital disruption as “a transformation that is caused by emerging digital technologies and business models.”

Digital Disruption in Banking has been revolutionising. Emerging companies offering incredible software solutions for digital banking, businesses promising to digitise and move core bankings to the Cloud, and Market Monitoring tools allowing any Bank to monitor their competition and themselves every second of the day are leaders of this revolution.

What is the cause though? There should be a driving force behind this sudden need for digital transformation. The Banking industry, even though one of the most traditional and archaic industries, has never shown such high interest in going digital, until these last few years, with the immersion of the Digital Banking Services and the frequent use of e-banking.

Challenger Banks coming to the Banking surface have had a huge impact on this rush towards digital banking transformation. Mostly because of their nature. By definition Neobanks and Challenger banks are built using a customer centric approach, an ideology that puts the customers’ needs and desires at the core of the product development. They are Banks, built by people to cater the people. Putting their wishes and experience first is one of their main goals.

Since the uprise of Challenger Banks, a lot of traditional, well-established High street Banks have seen an alarming number of customers, switching their everyday banking to one of these Challengers. The most common case was a high volume of customers, most often falling into the younger age groups, trying out these new Banks, since their modern and digital looks suited them better. People who are used to having their entire lives work right from their phones and smartwatches found Challengers obviously appealing.

The appeal turned into trust, and now a vast amount of people, even though they maintain an account at a High street Bank, use Banks like Revolut or N26 for more than their everyday Banking. Yet, High Streets have been offering services through their digital banking platforms for many years. They were the pioneers of digital banking to begin with. So what made everyone abandon them?

Ralph Waldo Emerson’s quote “It's not the Destination, It's the journey.” fits the reason perfectly. Let’s explain why.

One reason has to do with the “destination”. In this case it has to do with whether the user could execute anything they previously could with a High street, through the digital banking platform. The so-called-Functionalities. They play a big role in customer satisfaction. The more the merrier, for a user that wants to be able to control their expenses right from their phone.

The other reason has to do with the “journey”. In Digital Banking, offering the most is not the most important factor. Sometimes it can even have the opposite effect on users, and repel them. Sometimes it may not even matter how much a bank offers you. Why? Because you also have the parameter of how well you offer aforementioned. Does it take less time and effort to do the same task in a High Street or in a Challenger? If this is the case for a lot of tasks, then however many Functionalities you offer are deemed worthless against the User Experience you offer for them.

A look into the digital banking landscape of Europe and the US will show the wide difference that exists. Europe’s list of Challenger Banks is endless, with Challengers ranging from national to international. France has their own neobanks, yet a french customer can open an account with bunq, who sees no borders.

Some would say that the US challengers are way less in number than what Europe is offering, and maybe even a bit behind to all the capabilities that European Challengers have implemented.

On the other hand, both the US and Europe have highly distinguished High street banks, like Bank of America or Barclays. Who would ever underestimate them?

Let’s have numbers speak for themselves. We are going to analyse two scenarios, one for each region: PNC vs SoFi and Lloyds Bank vs Revolut.

Our aim with these comparisons is to see their differences, in terms of digital banking, and answer to some extent why a customer would switch to the latters.

The areas of comparisons are as follows

Of course all these would need months of research to identify, quantify and examine. Banks have their own manners of carrying out this analysis. I, since it is one of the most important parts of my work, use a different method and like to rely more on actionable data coming from analysis and research. This article wouldn't be made without the team behind FinTech Insights and their platform, so thank you!

A closer look will show us that across all channels, in the categories of Accounts, Money Transfers, Cards and General Payments, PNC still offers more. Which are core services of banking, and the most important ones.

It doesn’t matter if we are talking about transferring money, managing Cards or paying bills, SoFi offers a better user experience than PNC. In simpler terms, they offer these services, in a better, more friendly and frictionless way for the user.

If we really put these two banks to the test and compare what they have in common and what each bank has that is unique that the other does not, we can find some very interesting findings. Luckily doing so was done with no more than 5 clicks, in FinTech Insights. Here are some interesting findings: 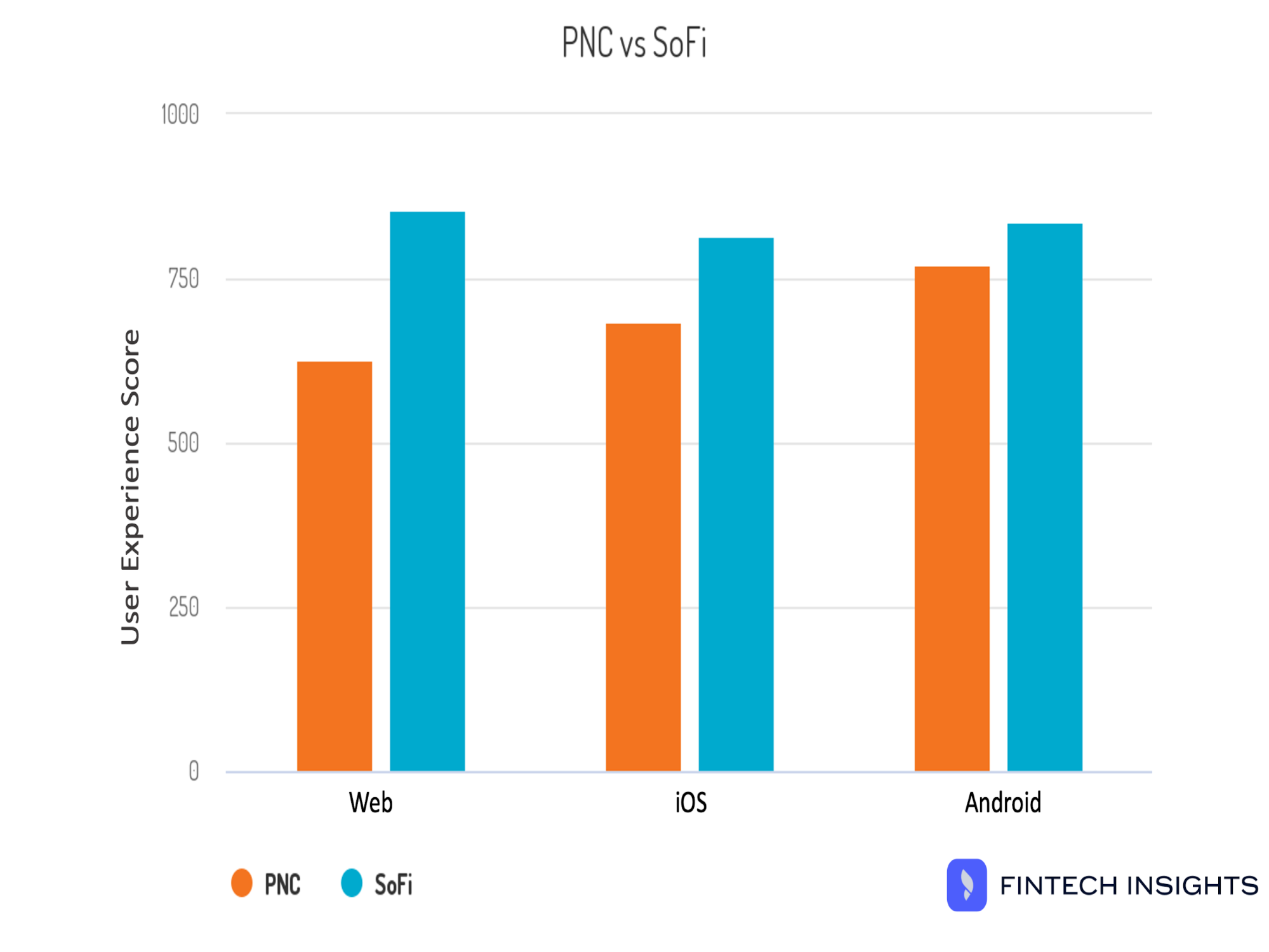 SoFi could add the following in their Digital Banking apps, which they don’t have, yet PNC does offer:

PNC could add the following in their Digital Banking apps, which they don’t have, yet SoFi does offer:

Revolut has been known to many as the unicorn of Fintech, and currently offers more functionalities than any other bank across Europe and the US, which is at least impressive. How do they stand against one of the most known High Street Banks in the UK?

What can Lloyds or Revolut add to their digital product roadmap to surpass each other? And which are some few features that they have failed to include that would make a big difference? 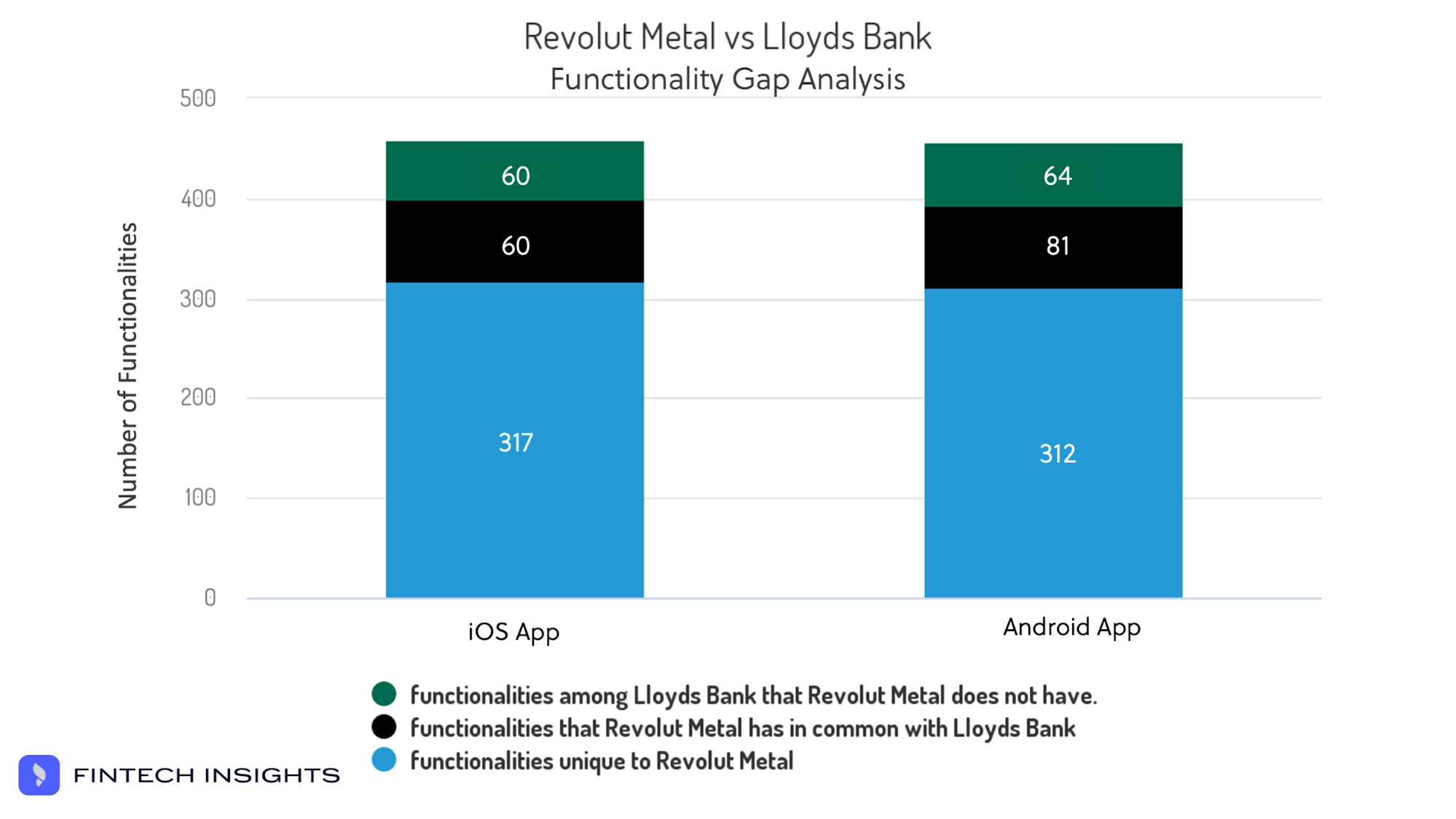 Revolut could add the following, taken from Lloyds digital banking:

On the other hand Lloyds has plenty of options when it comes to enhancing their existing digital banking applications with new additions. Here are some that stand out:

As it seems, finding the silver lining between what you offer and how well you offer it is a tough job, and having transparency into your competition or Market is not easy. Banks need to pay closer attention to all the offerings and User experience Challengers have. There is a reason behind this sudden customer turnover. And there is a reason behind their name of “Challengers”. They are challenging the financial ecosystem by introducing innovation, technology and excellence in customer experience. Yet it is not a lost battle for High Streets. They still have the means and the ways to become better and show customers that they are worthy of their long last trust.

This article was published in the FinTech.Finance PayTech Magazine